As indicated in the last report I had left Seychelles behind for a month on 23rd of June and fished a few different places along that absence. Did not go too well but I still will needfully elaborate on that as it was at least fishing while back here there was not even thinking of such. Of course I stayed in touch with my lads and kept an eye on the weather situation which was such that one would not want to be here. The Southeast was blowing constantly at 20 to 25kn and at times even a lot harder. On top some unusual current stirred up the southern Indian Ocean triggering massive waves in a vast area. Here on Praslin among other effects the ferry jetty was washed over and damaged to a level that still no-one is allowed to drive on it. Took these two pics from WhatsApp videos sent to me so the quality is not too good. But any of you knowing the spot and the usually calm water there will have an idea of how things were here.

Next to heavy rains temperatures fell close to record lows in the 20°C range and on the Outer Islands even below. All this I observed from a safe distance. Germany at first and a little later from Cape Verde. Had met there with my buddy Marco and to regular readers of this format familiar Stephan Kreupl from bluewaterfishing.eu for a few days Marlin trolling. The latter is involved into a charter company running three boats and Marco also has already around 20 visits of the place under his belt. Last year fishing the same postseason together both managed to reel in a grander size Marlin so I felt in best hands joining them at last as it had been on the agenda for some years. Prerequisits looked very promising as the booked boat Smoker just a few weeks before made headlines with this 1370lb Blue Marlin.

This btw was the second lagest Atlantic Blue ever weighed if I figured that out correctly. Arriving after some travelling hassles I first thought the pilot instead of reaching at last the island of Sao Vicente had landed on Mars. Backside actually. Hardly a tree or justs scrub and I learned it had rained only once along the last three years. Much worse fishing had also turned droughty. First day still without me the chaps had a miss of a small Marlin while second day we saw one for an instant at a teaser and the following two days we just fished the water. In winds of 18 to 25kn all boats were limited to a somewhat protected area but also the boats fishing around others of the islands only reported fish very occasionally. To be precise about one from every five trips. According to the local experts this was terribly slow for their standards looking at the high season fishing of raising about 3 Marlin per trip on average as I figured from tales and statistics. For us though along our last day it was only about a lucky punch to avoid blanking completely that week. And indeed all luck concentrated within a mere three minutes for me. First skipper Ryan from the flybrdige called a Marlin seen finning under the surface and made a turn on it. That rather small fish grabbed the lure running far out. It should have been Marco`s but he was just having a leak and called me to the rod. As the boats reverse fast on the fish I had to crank that heavy 130lb reel like hell to stay tight and after I think not even two minutes the deckhand grabbed the leader. So fish caught according to IGFA rules and Atlantic Blue ticked off my bucket list no matter what would happen now. The mate pulled on the leader as to turn the really small 120lb or so fish and instantly it was off. According to the skipper with best view from up there it had not even been hooked but just entangled the bill a bit in the leader. Had it already turned a bit along that preceeding `fight´ we would have been left empty handed. This way there is at least a pic of the flag as we got none of the fish. All I had seen from the fighting chair was a brief glimpse of a silver and blue shadow. After that despite lifted spirits we had no more action and plenty of time again to marvel at that unreal landscape. A few impressions: 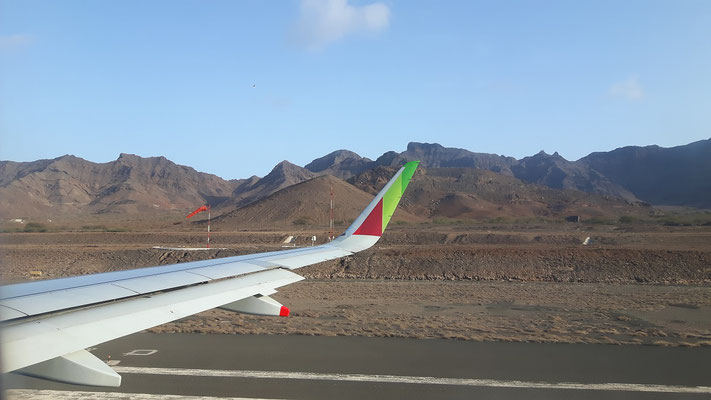 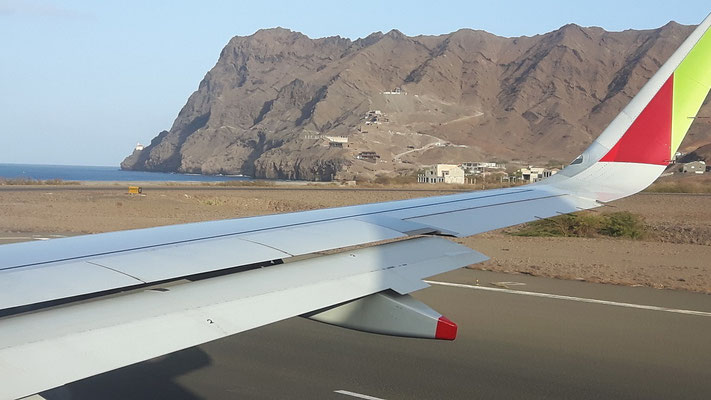 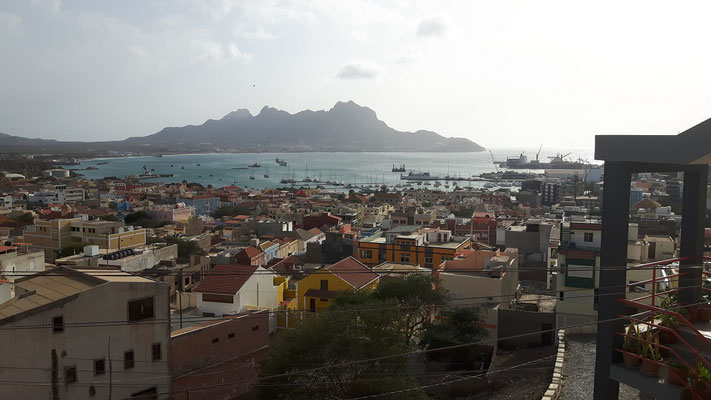 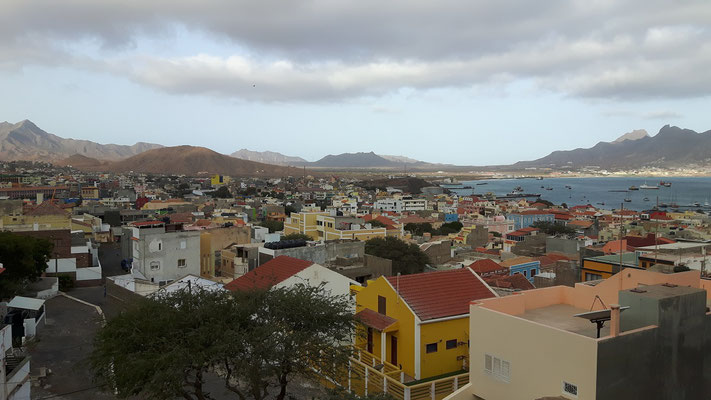 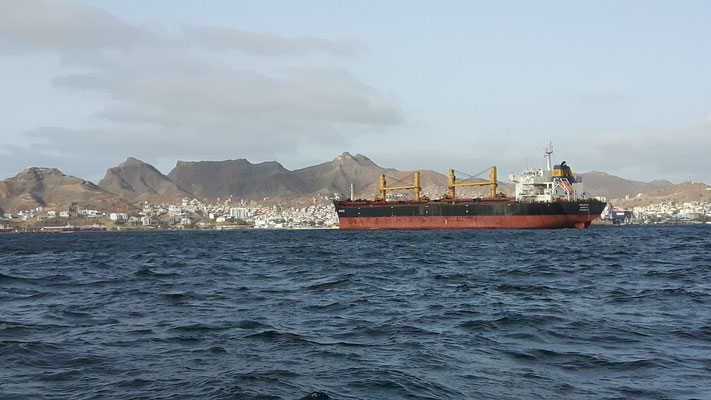 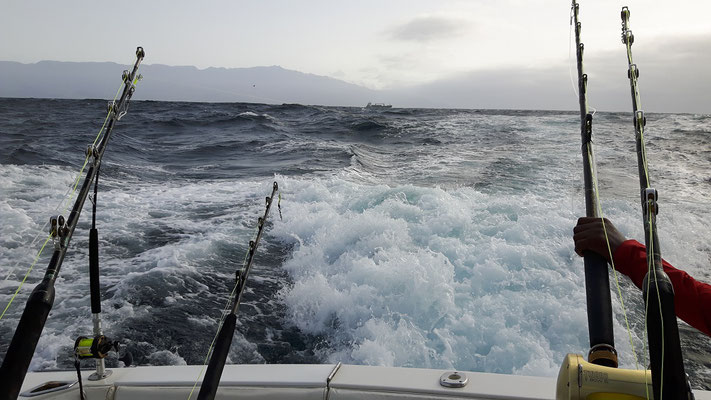 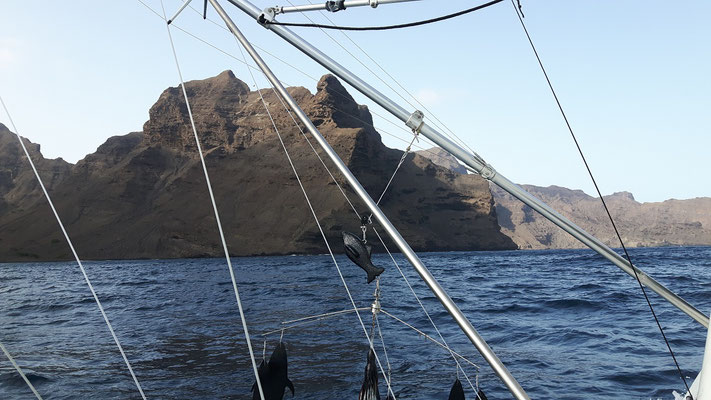 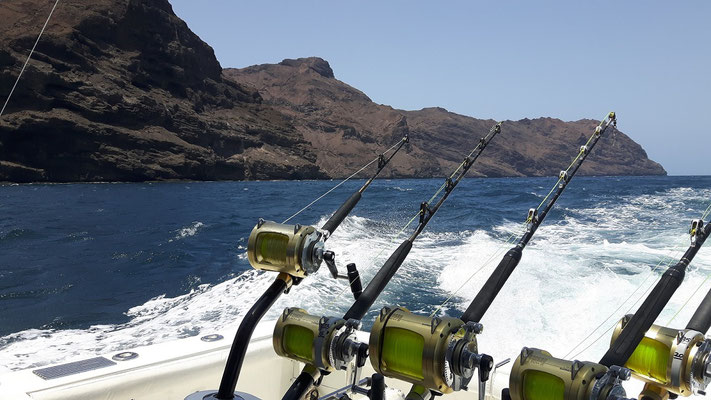 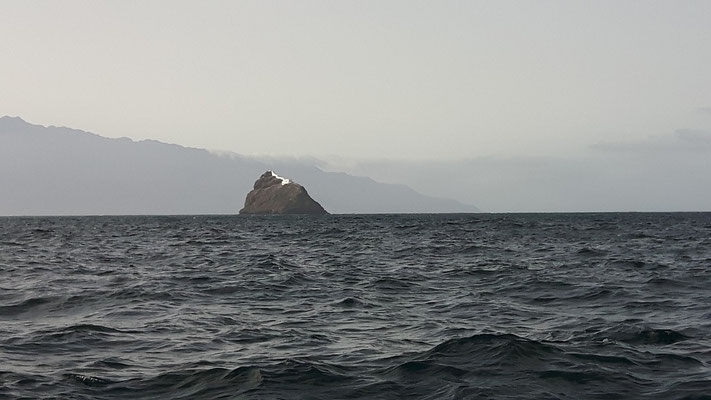 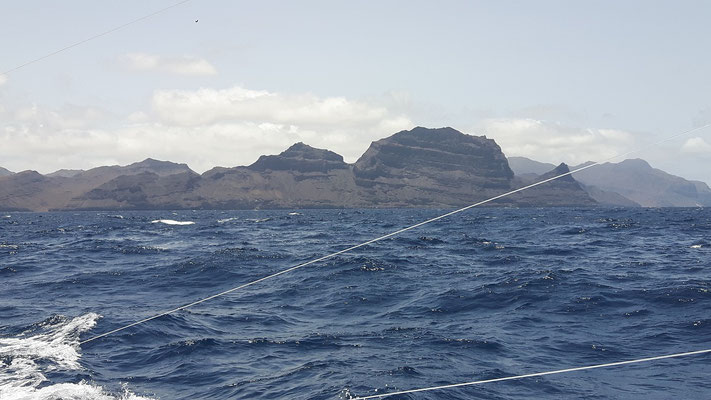 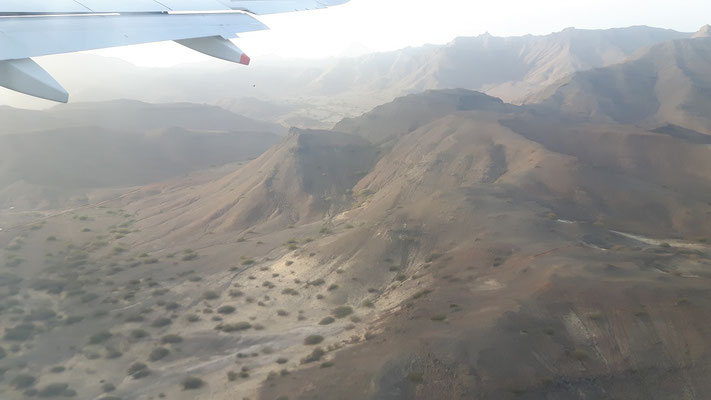 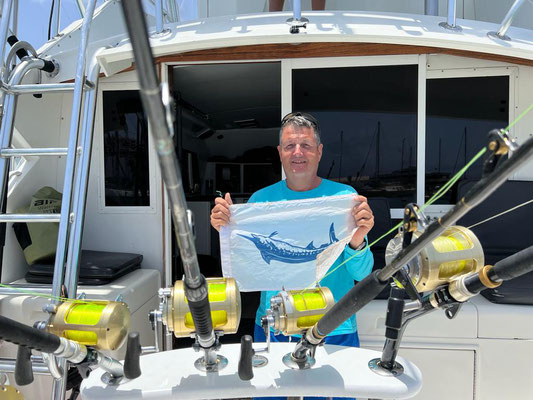 All that might have sounded somewhat disappointing. Even more so when considering that along my presence only two other fish apart from Marlin (Tuna of around 70kg btw) were caught between around 30 trips of all boats. But fishing there is completely focussed on Marlin, thus very selective by those big lures and teasers and impressingly professional. That dry roughness of the landscape had it`s very own charme and on top I had the chance to get to know some legendary boats and skippers. So I definitely recommend  the place to any angler interested in Marlin and want to vist and fish it again some day. Not minding an a little better bite though. But still as proof that any moment the fish of a lifetime is possible: only 3 days after our departure that Blue Marlin World Cup fished around the world took place and for the third time in four years Cape Verde won the half million US$ prize. That winning fish weighed 950lb.

That even the best fishing grounds don`t always work as planned I was tought once more a week later in the Netherlands. With Marco and Jörg and towing their boat we went to fish a weekend at the Volkerrak. This body of water along with two more arms of the river Rhine delta is considered the best grounds in Europe for freshwater predators like Pike, Perch and Zander these days. The first impression even before starting to fish was just really nice: a sweet little yacht harbour to slip the boat and tie it up just in front of the most right one of those semi floating thatched roofed houses in the background.

For Saturday and Sunday we had always scheduled a morning trip from 6am until noon and an evening session from 5pm until midnight. For a start I technically followed my two experts in fishing the most sophisticated and modern softshads and spinnerbaits but as nothing worked tried other stuff. Oldschool first with a very simple spinner promptly producing a decent 94cm Pike. Later along the afternoon then under constant headshaking of my mates I persisted with a little popper and grinned as a smaller Pike could just not let that thing pass. Hehe. Just my kind of fishing even though that thing was not even 10% of the weights I cast here. My grin dried up as everyone else`s though along the next day as absolutely nothing more happened no matter where and what we tried. Only late Jörg picked up a small Perch and a juvenile Zander and Marco also got two more of those so a solid draw between us eventually at terribly low level. Still I had a really fun time and it was a pleasure to fish again such different techniques in a completely different environment compared to what I got used to over that now more than a decade here in Seychelles. A few pics on all that also and this time at least with one fish: 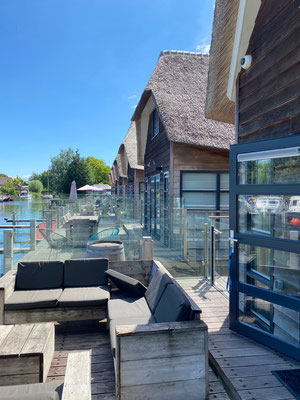 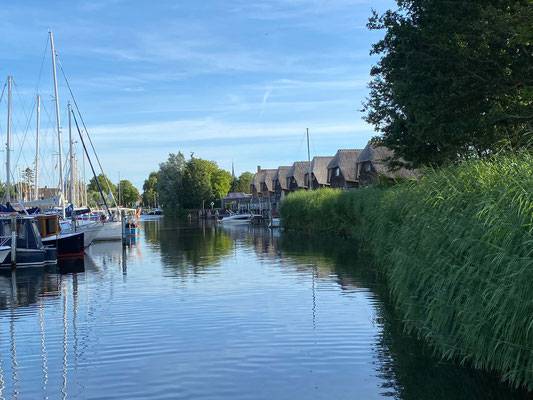 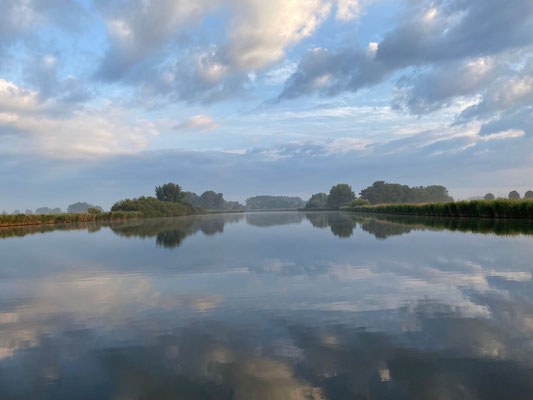 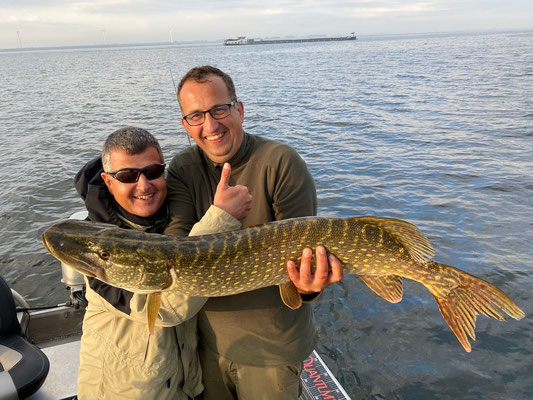 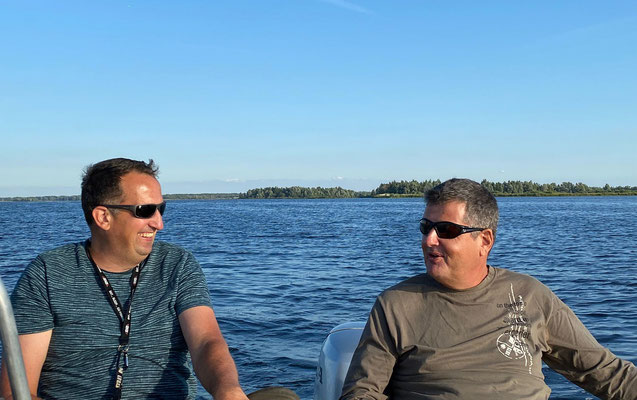 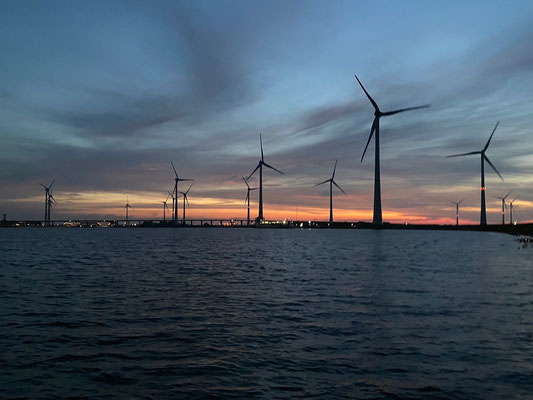 A few hours of standing chest deep in the Baltic Sea casting for a Seatrout rounded my travel fishings off in the expected way. Those for a reason are dubbed the fish of a thousand casts and the about 200 I did were not enough. With 35°C predicted I had chosen the thin PVC waders but it was only 17° in a freezing wind and the water was similarly cold. Thus all along I thought longingly of the much warmer neoprene ones literally freezing my butt off and took home nothing more but a runny nose. So much to my off Seychelles adventures and after all that I at last arrived back in Seychelles on the 20th of July finding the weather also still very cold, windy and wet for our standards. It improved a bit since with the wind oscillating around the 18-20kn typical for the Southeast while it also got a bit drier and warmer. Checking around for any fishing related info during my absence the only noteable finding was that Mervin`s new boat finally made it into the water. Beautiful and I can`t wait to head out with him.

For now though it is still moored and hasn`t moved as the weather gave no option so I also left mine at the boatyard in Baie St. Anne. Flyfishing neither was an option as the water here in the home bay being the only protected place was stirred up by undercurrent waves that had brought in drifting seaweed. On top all these sailing cats finding shelter here for the night anchored close to my home rock so any reasonable size fish would have gotten into their chains. Could have maybe gone spinfishing somewhere else but steady info exchange with German angler Levi and his son doing exactly that all day long for about a week did not really trigger me. The chaps fished hard getting bits of action and a few presentable fish but it was very slow all in all.

Only last Friday there was a hole in the wind predicted. As it materialized at just below 15kn I decided to fetch the boat home and do some light jigging to get a few kitchen fish. Usually that produces me around 20 fish along let`s say 5hrs or so but this time even with Mervin joining we struggled to get just 10 between us. In the La Digue channel we drifted nicely with the wind and it seemed one could have gone further or even to the Drop Off but a bit north we suddenly drifted straight into the wind. So the current must be pumping straight into it meaning that outside the islands´ protection sea conditions are still very rough. Had expected a few boats to go out that day working down a backlog that should have built up but it seems nobody went. So all in all a bit frustrating here at the moment from an angler`s perspective and thus we are waiting for better days to come.